It is customary to spit while speaking

Give the Rhineland a profile

For a good two weeks now, the protective structures in the supermarkets and other shops that are still open have been becoming more and more professional: at the beginning, plastic sheets were simply stretched in order to prevent an unintentional exchange of body fluids, but now solid, more or less aesthetically successful, transparent separators made of plexiglass are almost everywhere built-in. 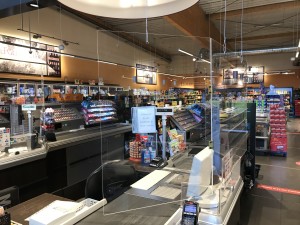 The mask requirement has been in effect since last Monday, and politicians, virologists and people across the garden fence have been discussing nose and mouth coverage for months. Sewing tips are exchanged on social media and people who I would not have believed to have a penchant for needlework before turn out to be accomplished mask makers and creative designers.

Why is? We now know that the coronavirus spreads like a cold via droplets from the oropharynx. Every time you cough and sneeze, billions of tiny viruses are thrown meters into the environment. Clearly, the spread and reproduction is a genetically programmed target of viruses, hence the urge to cough. To prevent these droplets from spreading, we have all learned to cough into the crook of our arm, as this directs at least some of the viruses back onto our own body. But that's not enough, because even when breathing normally and especially when speaking, microdroplets are emitted unnoticed: Linguists may correct me, but hissing and plosive sounds are particularly risky. Many of us remember situations with recurring feelings of disgust with people who have a so-called “wet pronunciation”, mostly unnoticed by them, but formative for the environment. Measures such as the face mask and the transparent partition are designed to protect against these droplets. 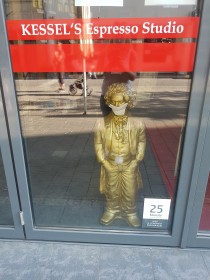 From a cultural anthropological point of view, it is extremely exciting to see how people deal with this knowledge of droplet infection and protective measures. However, this article is not about creative mask design, but about the cultural significance of saliva, which, as a natural body fluid, receives remarkable symbolic charges in certain historical and social contexts.

Basically, saliva is a vital thing: Produced in the salivary glands in the mouth, it always ensures sufficient moisture for the sensitive mucous membranes. The human salivary glands produce up to 1.5 liters per day. When we eat, saliva dissolves and dissolves hard components so that we can even eat a wide variety of foods. Saliva plays an important role in taste, smell and speech. It cleans the mouth and teeth, has an antibacterial effect. So actually an extremely useful secretion - as long as we all keep our saliva to ourselves. Most of us find the saliva of strangers to be extremely nauseating.

In the next few days I will write in more detail on the subject of “disgust” (purity and danger), but in short: disgust is a culturally learned feeling that triggers very strong reactions. Body excretions are rated as nauseating, but also, and this is an indication of the importance of feelings of disgust for cultural systems of order, parts of the body (content) that are not in their proper place: blood flowing out of a wound, saliva and mucus, that drips from the nose when colds, or the emotions artificially generated as a disgust reaction in splatter films that show destroyed bodies in detail. 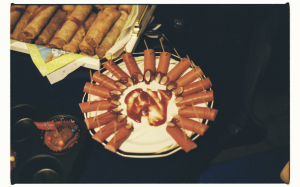 Disgusting: Viennese sausages are turned into cut fingers on the buffet at the Halloween party (Bonn 2001), © LVR

Because the triggers of disgust reactions are rated intensely negatively, they are in turn useful tools to generate massive feelings of devaluation, demarcation, hurt and humiliation. Many of our swear words and insults contain references to feces: What a shit! You pissnot! There are many examples of this, also in other languages.

To get back to the saliva: Spitting on things and people is a massive gesture of humiliation, insult and degradation. Spitting at someone is a deliberate attack on the integrity and honor of the other. In German criminal law, spitting is a physical offense that can be punished with up to two years in prison. Spitting out in front of another person is also offensive.

Though spitting out can be observed quite often in everyday life: On the one hand, with athletes who explain their spitting out in public spaces with increased mucus development and the associated shortness of breath during exertion: the mucus has to come out. Many a scene on and on football pitches seems to be at least in the transition between insults and respiratory care.

Similar to spitting out, which is especially popular with male adolescents in groups - it is considered "male" (therefore I can do without the female forms), as "cool", has a strengthening effect on the group and can easily be varied from a self-affirmation gesture to provoke to insult.

The fact that the majority of the rest of the population is uncomfortable and feelings of disgust arise when a group of 14-year-old boys stand at the bus stop and spit out, but also has historical reasons that have to do with experiences of illness. Because of course pathogens from the respiratory tract also spread via saliva - see Corona. Many deadly infectious diseases worldwide, from the plague to Ebola and flu, can also be transmitted via saliva; the droplet infection as a highly effective way of spreading pathogens is partly responsible for the spread of the pandemic. 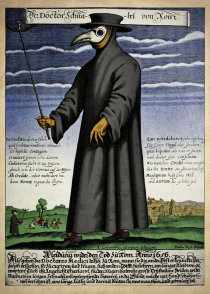 During the plague, for example, masks were also worn as protection; the beak masks of the plague doctors of the 17th and 18th centuries became famous. The beaks, filled with spices, vinegar sponges or similar things, were supposed to clean and filter the air, as it was believed in transmission through so-called miasms, a pathogenic contamination of the air. 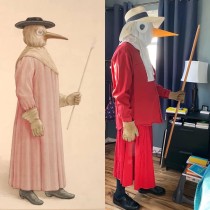 A game during Corona times: Museums are calling for people to recreate paintings at home and share the photo on Facebook. Here is a variant with plague doctor, facebook: Museums News: Between Art and Quarantine, April 2nd, 2020

But spitting it out has a very bad reputation in Europe (and in other parts of the world as well), which has grown out of epidemic experience. The reason is the tuberculosis epidemic of the 19th century.

Bone changes caused by tuberculosis have already been proven in the Stone Age. They can be found in Egyptian mummies, in tombs of the early advanced civilizations, Greece, the Roman Empire and in the Middle Ages. But tuberculosis or consumption is only perceived as a serious problem and epidemic in phases of large population growth. There were various theories about the causes, in some places it was considered hereditary, many doctors believed contaminated air or soil to be the cause, and the idea of ​​infection from sick people was one of the explanatory theses.

In the 19th century tuberculosis was a disease of the poor: in the growing cities of the industrial regions a large part of the population was infected, around 1880 every second death in people between 14 and 40 years of age was due to tuberculosis. Rest, light and air (UV light actually kills the pathogen) as well as good nutrition were recommended as therapy, which was not feasible for the particularly affected population groups of the poor, which also included most of the industrial workers. A stay in a sanatorium, as described by Thomas Mann in his novel “The Magic Mountain”, could only afford sick people from rich, middle-class or aristocratic families. Here the disease was sometimes even considered attractive: the fever attacks, weakness and paleness of the sick corresponded to an ideal of beauty for women at the time.

At least since the discovery of the tubercle bacterium by Robert Koch in 1882, more was known about the ways in which it spreads and infected: Tuberculosis is mainly transmitted via infectious droplets when coughing and spitting. As an epidemic medical measure, governments across Europe tried to stop the widespread spitting on the ground. With kind requests, admonitions, bans and fines: Please do not spit. 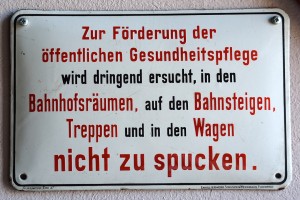 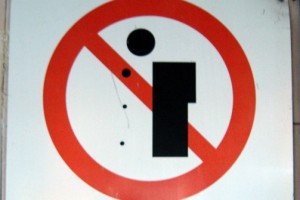 Historical sign with no spitting on the train station, photographer: Joppo Kelin from New York, CC BY 2.0

Numerous works of art from the 19th and early 20th centuries deal with suffering and dying from tuberculosis. These images and texts, as well as media popular today such as the “Charité” series, which is fittingly currently being repeated, keep the knowledge and experience of the tuberculosis epidemic alive to this day, including memories of the risk of infection through spitting.

However, this historical knowledge does not adequately explain why we are becoming mask wearers so quickly and without contradiction. A variety of explanations come together here: On the one hand, wearing a mouth and nose mask conveys security, it is perceived as a protection against a more invisible virus. Doing it yourself gives you the opportunity to act constructively (and creatively) for self-protection, an opportunity for self-empowerment in a situation of uncertainty. And the more people wear a mask, the more natural it becomes: social and state control are added.

A social aspect also plays a role: the mask protects the others above all, so wearing masks is a caring act. And the self-sewn and individually designed mask seems to be the perfect gift for all upcoming birthdays and other celebrations in 2020. 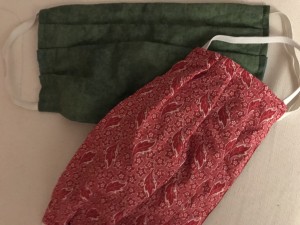 Mouth and nose masks made and given away as gifts (Bonn 2020), photographer: Dagmar Hänel, © LVR