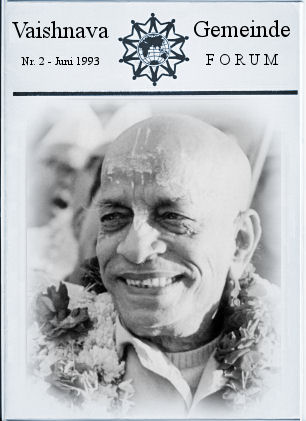 please take my humble obeisances. All glories to Srila Prabhupada!

Thank you for suggesting a meeting with Sacinandana Swami. Unfortunately, I can't over the weekend because my father is away on a short vacation and I - as they say - have to hold the position. We will probably come to Hamburg the following weekend. For a long time I have very much wanted to continue our talks.

Oh yeah, I spoke to Sukrita a while ago. We also talked about the new publication. He let me know through the flower that in future you will probably no longer publish letters like Taponidhi's. I think that if the few Prabhupada students are not allowed to express what is important to them in their forum, then the Prabhupada reunion will be deprived of a great opportunity.

The God Brothers or God Sisters who have a different opinion can write letters to the editor on this. This can initiate a dialogue that enables a deepening of the cooperation. Or to put it very simply: "We have to talk about things in order to make a difference." Most of the time, with grades, you try to keep the status quo ... but I don't think that's what we want.

I look forward to meeting you again soon.

Your servant
Asok Kumar that

Dear Vaidyanath, thank you very much for your call and your newsletter with the Prabhupada -Toshani.

I can understand your feelings well and I think it's good that you take concrete initiative to change your situation. As far as I am concerned, I do not believe that the path you have taken or the goal you are striving for corresponds to me. As you write correctly, we Prabhupada students (or actually quite ISKCON) are threatened with extinction. Why is that?

Well, if we look at the history of development, only those species have become extinct that did not know how to adapt to the changed living conditions. Similarly, I have come to the conclusion that ISKCON lacks the mental flexibility to survive in the long run or to carry out the task given to it by Prabhupada. It is of course desirable for you and other devotees to attempt to work in this direction.

To be honest, dealing with an institution with all its power etc. is too arduous for me. I am trying to silently grind and polish the jewel Srila Prabhupada gave us. I hate the display of so-called spiritual progress (actually, it is a blind official-like following of instructions that have not been understood). So the invitation to the festival in London didn't impress me either. In the Prabhupada Toshani I immediately found loud political slogans that, in my opinion, hardly contribute to Prabhupada's honor.

I find it really embarrassing when, even today, the devotees are still whipped up from one mega-event to the next with superlatives. Significantly, you only read about thoughtfulness and a little self-criticism and reflection on the essentials on the last page of the last letter to the editor (Gopavrindapala, who, by the way, I know personally from L.A.). As long as such voices are so underrepresented, the ruling GBCs, gurus, etc. are unlikely to change their American black and white style.

As I said, it is too difficult for me to invest my time and energy there. I am of course writing all this based on my experience with ISKCON. You may have other positive experiences or memories, and then you should also feel encouraged and empowered to achieve something. But do you really need ISKCON for that? How long did Srila Prabhupada serve his Master all alone, without the support of the corrupt Gaudiya Math! Isn't it perhaps because of this that he was able to achieve what he has achieved?

The fact of being an initiate disciple of Prabhupada cannot be taken from you by ISKCON and is not dependent on ISKCON. If I am allowed to give you advice as Godbrother, do not depend on the approval or disapproval of this institution, as Prabhupada did not in his day either. Follow your heart and you will do the right thing for Prabhupada.

With this in mind, I wish you and your projects much success and the blessings of our master!