Should betrayal be answered by betrayal

Think carefully about where you can achieve the most with which figure. Change people more often and go to a scene with them several times.
Has Gaby already spoken to Mrs. Bleibtreu about secret dog competitions?

Willi accidentally tries the dog chocolate at Frau Bleibtreu's. As compensation, however, he can take the dog whistle with him.

Tim should ask Lotti in the tanning salon for help. And above all: don't forget the registration form!

Gaby should ask Cora Klinke about the secret dog competitions.

Gaby was accused of theft by Mr Boldewyn, the owner of the pet store! How can you help TKKG restore their reputation and solve the mysterious disappearance of Terri?
From now on you can also go to the optician Ms. Bellheim and Karl's room.

Willi should ask Leonore Klinke whether Santa Clauses are also collecting for the animal shelter!

Can you and Karl find out something about a secret passage at Frau Bellheim's and that the pet shop and the factory are close together?

Tim can find out something very interesting about her relationship with Cora from Leonore Klinke.

There's a video recorder in Karl's room. Each of the four TKKG members can find out something exciting on the video tape.

You should go to Santa Claus with every TKKG member and try to find out something about him.

Ms. Bleibtreu is happy when you visit her with Willi and write something on her leg in plaster. From Mr. Bleibtreu you will receive a bar of dog chocolate from the brand "Hasso Jack of all trades".

Is Cora in the pet shop? Then you can try to get to the back yard.

You can't pass the chain dog Pascha? No panic! With the help of the dog chocolate, Willi succeeds in appeasing the dog.

The dog whistle will help you in the yard of the pet shop. Blow hard and ... a dog from the shed answers with three barks.

Have you already discovered and examined the footprints in front of the shed door with Karl and Tim?

Tim notices that the shed door is locked with a "bargain" lock.

Now you and Tim should take a closer look at the lockers in the tanning salon. When Tim returns the completed registration form to Lotti, he receives a "bargain" lock key for his locker.

Have you already tried whether the key can be used to open the shed?

Go into the shed with Gaby, turn off the lights and go to the door with the phosphorescent cross. Bad luck! Gaby is caught in the shed by Mr Boldewyn and is now under house arrest. You can now only visit Gaby in her room.
From now on, however, you can go to the old factory.

Karl recognizes the man at the factory gate ...

With Tim you should check with Mr. Boldewyn how he knew Gaby entered the shed.

Have you and Tim checked the lockers in the tanning salon for evidence?

In the animal shelter, Willi should take a closer look at the cloakroom.

In conversation with Leonore Klinke you can find out who the coat belongs to.

Did Tim notice anything about Cindy's boots?

Did you find the wig with Tim in the tanning salon and asked Lotti about it?

The next time Tim goes to the tanning salon, he'll meet Cora.

Have you overheard the man at the factory gate talking on the phone?

At Gaby's, Willi talks to Tim about the coat. Willi then goes to Leonore Klinke again to take a closer look at the coat. If the coat is still hanging there ...

Has Willi already expressed the suspicion to Mr Bleibtreu that her subtenant might have something to do with Terri's disappearance? Mr. Bleibtreu is of the opinion that he would recognize the barking of the "accident dog". How can you prove it to him?

Has Karl got the dictation machine out of his cupboard yet?

A Dalmatian is tied up in front of the pet shop, whose barks can be recorded with the dictation machine. Can Mr. Bleibtreu identify this barking?

Have you already recorded the Dalmatian barking in front of the factory gate and played it to Mr Bleibtreu?

You can go to Domian's room now. There Willi should take a close look at the notes on the pin board.

Karl now receives an ointment against sunburn for Tim from Mrs. Bellheim.

Have you given Tim the ointment yet? Excellent! From now on Tim can get involved again.

You and Tim should look for a dog leash in Domian's room and then show it to Ms. Bleibtreu.

Have you already cleared the snow from the manhole cover in front of the factory gate?

The next time you visit Bleibtreus, you will meet Domian Selch.

Did you and Tim find the missing coat in the pet shop shed and a receipt in his pocket?

If you go to Gaby with Karl, she will tell you that she is terribly bored. Karl can then borrow the videos that are on Leonore Klinke's table and bring them to Gaby.

The next time you go to Gaby's with Karl, she has already watched the videos. However, one of the cassettes appears to be empty. Karl should take this cassette with him and take another close look at it there.

Did you watch the entire videotape with Karl and see Domian with Cora?

At the factory gate, you watch the three suspects pull up in a car and park over a manhole cover. If you open the car door, you will see that the sewer can be reached via the gully. However, it is far too dark and therefore too dangerous to go on.

You and Karl should ask Frau Bellheim if she would lend TKKG the flashlight from the shop window.

Go to Gaby and talk to her about the plan to get into the factory through the sewer system.

Open the car door and look at the sewer entry. Pretty dark huh?

Take the flashlight out of the box, turn it on.

Go through the sewers and climb up.

The dogs were blinded by the bright light of the flashlight, began to bark wildly and you were caught by the gangsters? Bad luck!

Now it goes into the sewer again and starts all over again. This time you should rather use the blue filter of the flashlight so that the dogs are not blinded again!

Click on one of the boxes in the factory floor and you will be faced with the tricky task of blocking the exits for the gangsters with the boxes.

Don't know how to play the game? The 4 outputs are to be adjusted with the red boxes. Here are a few tips: 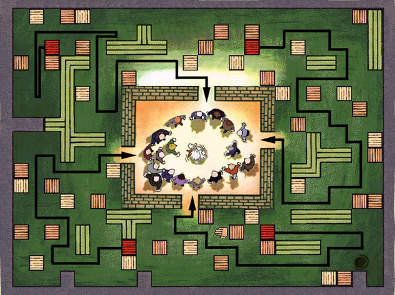 Can't you manage to push the boxes in front of the exits on your own? Here you can see how the 4 red boxes are to be pushed in order to block the exits.

Did you block the upper exit with one of the boxes before you blocked the three other exits? Bad luck and caught by the gangsters! You have to block this exit as the last, because the gangsters will notice if you close this exit because it will be darker.

You have blocked all the exits and are now trapped yourself because the sewer system was flooded by rainwater? What a hassle!

If you try again, remember to open the drain hatch in the sewer with the regulator before entering the factory. Then the rainwater can also flow away and not block the exit. So, all over again ...

You locked up the gangsters and left the sewers? Congratulations! You did it and thus restored the good reputation of TKKG.

Do you have any detective questions that are not answered here? Then call the people from Tivola, they can certainly help you.

Source: Help.pdf on the CD-ROM