How are interracial couples treated in Germany

On 50 pages, the federal government lists where registered partnerships are disadvantaged. She wants to change some of this - but she's squeezing when it comes to important questions. 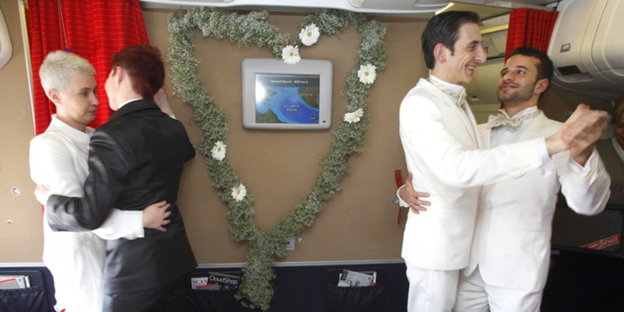 Happily married (on a plane!) But not on the same level in Germany: homosexual couples. Image: Reuters

BERLIN taz | It has improved a lot for gays and lesbians. They have been able to officially register their partnership for ten years. "Registered life partnership" is the name of the construct that the red-green federal government introduced in 2001. Since then it has been commonly referred to as "gay marriage" - a term that is misleading. Because the registered partnership is still not on an equal footing with marriage.

The Life Partnership Act of 2001 mainly regulated obligations, but hardly any rights. Since then it has been revised several times. Registered life partners were treated equally with inheritance law or the survivor's pension. In tax and adoption law, however, they are further disadvantaged, as in dozens of other laws and regulations.

With a major inquiry, the Greens asked for a detailed list of all areas in which registered life partners are disadvantaged and for a reason for this disadvantage.

On the subject of income tax, the Federal Government refers to the proceedings at the Federal Constitutional Court that have been ongoing since 2006. Until then, nothing will change.

The Union is largely responsible for waiting. The coalition partner FDP has long been pushing for a political solution. After the decision of the Cologne judges, the FDP MP Michael Kauch is now calling on the Union to "not wait any longer and immediately decide on the overdue equality with us."

Because the judgment of the Cologne Finance Court on the splitting of spouses for registered partners is a further step towards equal treatment. "We are of course happy about it," says Manfred Bruns from the Lesbian and Gay Association Germany. Actually, however, one demands the abolition of the splitting of spouses, because this is a "nonsensical promotion of housewife marriage and thus out of date". But as long as such "superfluous instruments" still exist, gays and lesbians must be put on an equal footing.

In addition to tax law, adoption law for homosexual couples is one of the most important existing areas of inequality. For example, gays and lesbians are allowed to adopt children as individuals, but not together with their partner. In a registered civil partnership, the adoption of a biological child of the partner, the so-called stepchild adoption, is allowed, but not the adoption of a child already adopted by the partner.

According to the will of the federal government, nothing should change about this. As a justification, she merely refers to a "binding European agreement on the adoption of children from 1967" which forbids a "second or chain adoption". The only exception is for heterosexual married couples. There are also lawsuits pending with the Federal Constitutional Court regarding the right of adoption.

The rights and obligations of registered partners are unevenly distributed. When it comes to reducing state benefits, marriage is on an equal footing with civil partnership. It is irrelevant whether a child is married or in a partner, the parents do not receive a child allowance in either case. As soon as advantageous provisions are concerned, the legislature, on the other hand, interprets the terms "spouse" and "married" very narrowly. For example, spouses of civil servants and other professional groups who are entitled to child allowances continue to receive child benefit. This is not the case with registered partners.

Here, too, the Federal Government is referring to the outstanding rulings of the Federal Constitutional Court. "That is the fundamental problem: When it comes to duties, you distribute them generously, when it comes to compensation for these duties by the state, you are very precise," says Beck.

Most of the existing disadvantages relate to specific legal provisions, mostly for individual professional groups. Many of them seem bizarre. For example, married chimney sweeps are given preference over registered partners when they have joint pension entitlements. Self-employed blind people who are partnered are at a disadvantage compared to married people in terms of exemption from sales tax. The license to handle explosive substances held by the master of explosives is transferred to the widow or widower on the death of the spouse, but not to the registered partner. The farm rules, which regulate joint ownership of agriculture and forestry after the death of a farmer, also differentiate between married couples and civil partners.

The federal government now wants to adjust some of these provisions. However, she does not want to commit to a schedule.

A solution to the disadvantages could be a general clause, which makes it clear that in all laws and ordinances registered civil partners are treated equally with spouses. That would be a political decision that can be made quickly. However, there is no mention of this in the Federal Government's answer.